I love to get in the kitchen and whip up a feast, so when Santa Maria kindly sent me some items from their Latin American range, I was eager to create some tasty dishes. I am a big fan of food which packs in diverse flavours and this range is perfect to keep in the cupboard, for those nights when you want a delicious dinner which does not take too much time or effort to make. 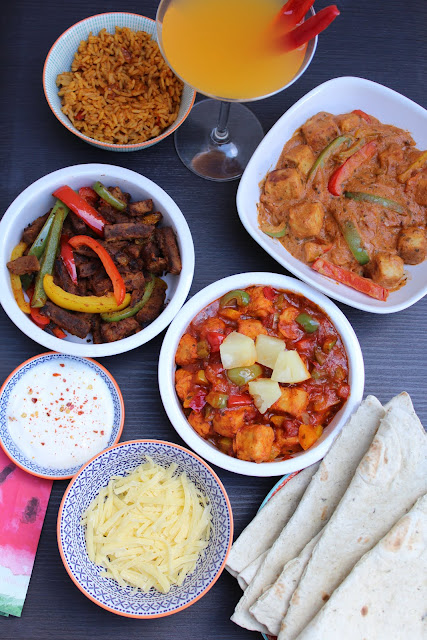 I was impressed by the variety of influences, with the products ranging from Brazilian to Argentinian inspired sauces, rice and rubs. Being around chefs so often has taught me that prep and mise en place are the keys to stress free cooking, so the first task was to get the kitchen tidy, wash and chop a heap of fresh peppers and marinate some Quorn steak strips in the Argentinian Barbacoa rub. I poured the sachet of spice rub in to a large dish, placed the Quorn steak strips in and mixed well, before leaving the Quorn to absorb the flavours for a while. The great thing about this dry rub is that while it is meant for use on steak, you can also replace steak with mixed vegetables or a meat substitute. 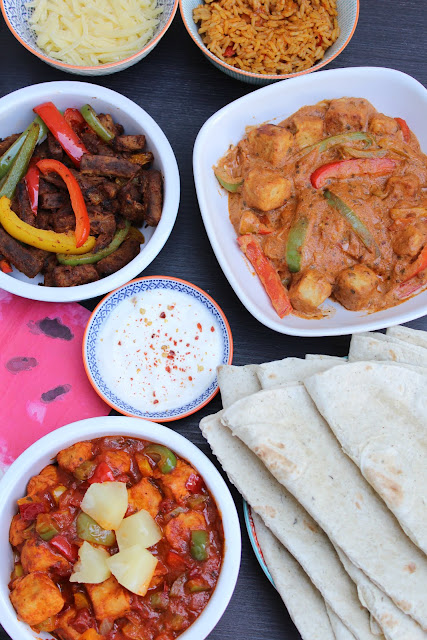 Once I was ready to start cooking, I decided to start by making the Quorn steak strips in Barbacoa spice rub. I poured some olive oil in to a griddle pan and fried a handful of the chopped peppers until they had softened, before adding the marinated Quorn steak strips and stirring regularly as they fried. You could use a saucepan, but I love using a griddle pan because it gives your ingredients that lovely charring which looks (and tastes) amazing. 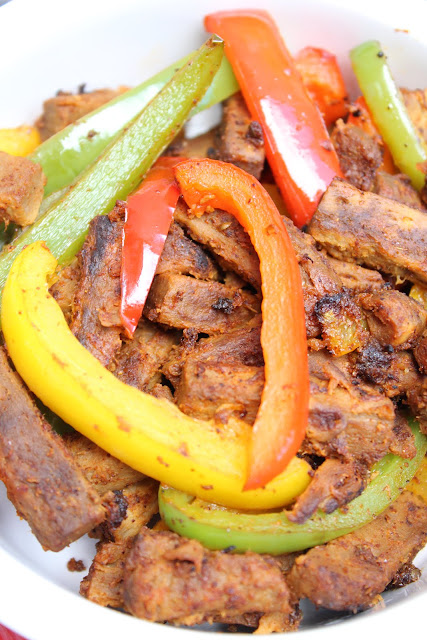 Once the Quorn steak strips in Barbacoa rub were ready, I placed them in an ovenproof bowl and put it in the oven on a low heat while I set to work cooking the rest of the dishes. Next up was the Cuban chilli Sofrito sauce and I followed the same method as before, frying diced peppers in olive oil, before adding vegetarian chicken style pieces and frying them until they were cooked through. Next, I added the sauce and left the chicken style pieces to simmer in the sauce for a few minutes, stirring regularly until piping hot. Again, I transferred the Sofrito chicken style pieces in to an ovenproof dish and placed them in the oven on a low heat alongside the Quorn steak. Next, I fried the remaining peppers in olive oil, adding more chicken style pieces and frying until cooked through, before adding the Brazilian Xinxim peanut sauce to the pan and simmering over a medium heat for a few minutes until hot. I put the Xinxim chicken style pieces in to the oven with the rest of the dishes and I also placed some tortilla wraps in the oven to warm up. 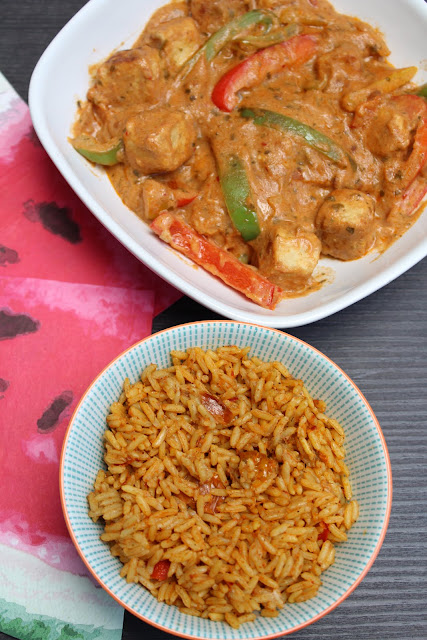 Meanwhile, I put mature grated cheddar and sour cream in to bowls, heated up the Arroz Rojo (spicy red rice) according to the instructions (you can heat this on either the hob or in the microwave) and set the table with some cute watermelon napkins I bought at Tesco. 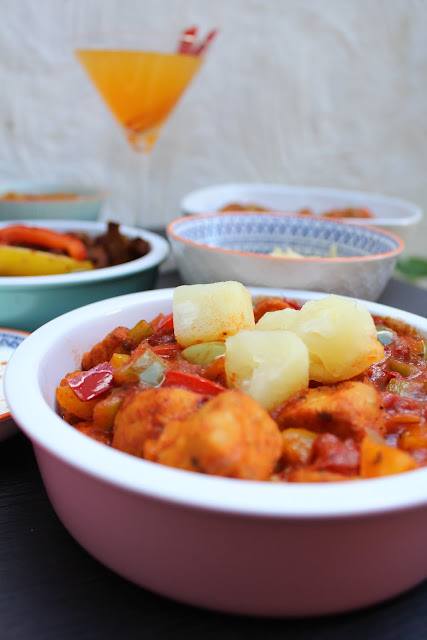 I love meals where everything is served communally and people simply help themselves to whatever they feel like, so I put everything on one table so that the feast could begin.
I also mixed up a cocktail which I thought would work well with the food, a Tropical Chilli Martini which was a real hit with everybody and complemented the food. 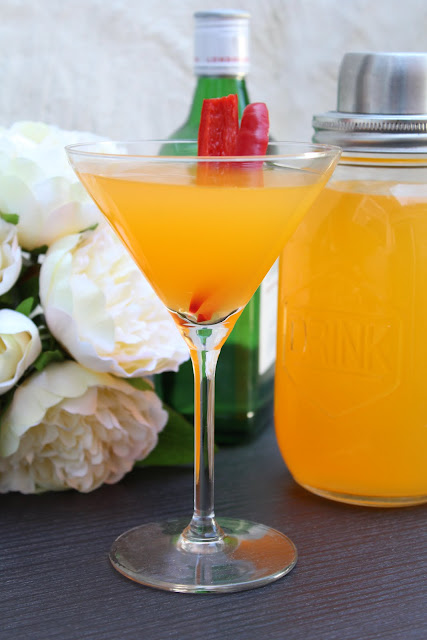 The dishes were all popular and I was amazed by how much flavour was concentrated in to each one. I loved the smoky barbecue taste of the Barbacoa marinated Quorn steak strips and the Sofrito was fiery and satisfying, while a garnish of fresh pineapple added a burst of sweetness. It was hard to choose a favourite, but mine was the Brazilian Xinxim peanut sauce, as the mild and creamy flavour was lifted by hints of zesty lemon and ginger. I served everything with a pile of warm tortilla wraps and we filled tortillas with each of the dishes, adding sour cream and a sprinkle of cheese on top. 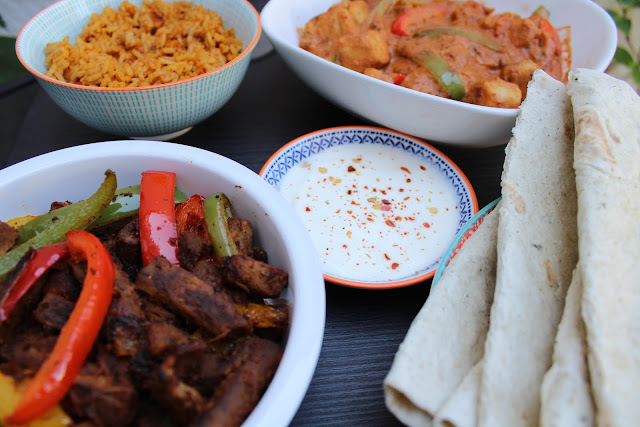 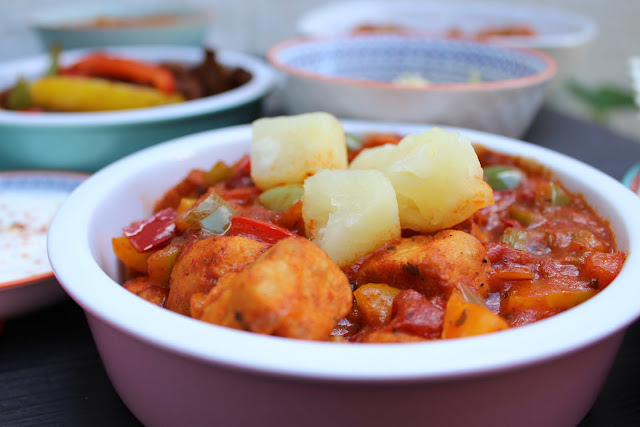 It was a lovely dinner party and we enjoyed the dishes, I love the fact that the Santa Maria range means you can create a party at a moment’s notice and sit back and relax with your guests rather than slaving away in the kitchen all night. We did not get around to trying the Caribbean pineapple and chilli sticky sauce this time as we already had so much food, but I look forward to sampling it soon. 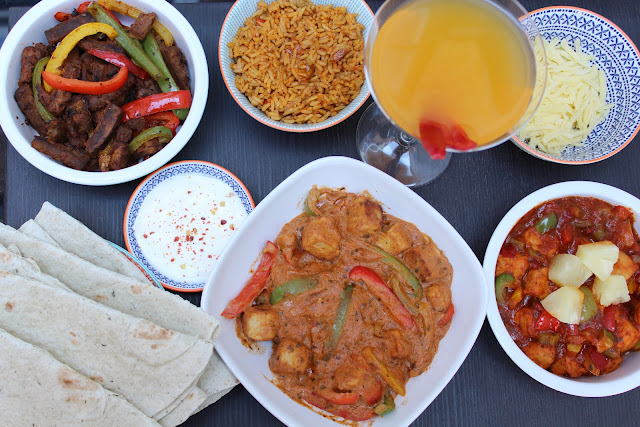 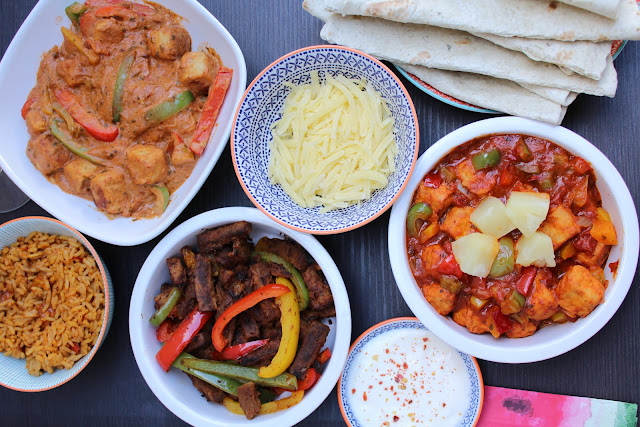 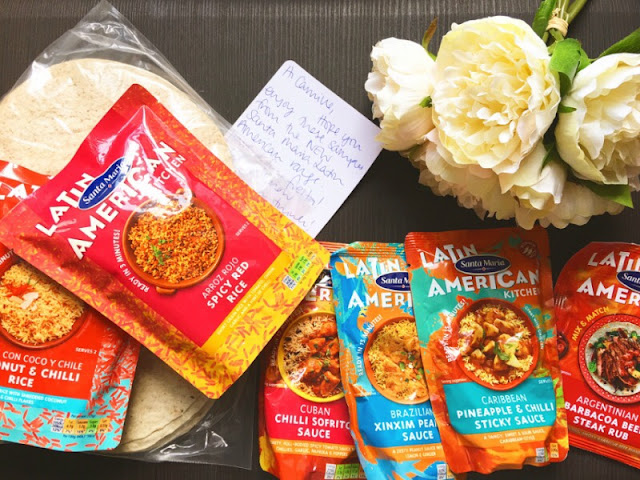 What do you all think, do you like the sound of the Santa Maria Latin American range and which of these dishes would you like to try? As always I cannot wait to hear your thoughts and thank you so much for reading this post.