Writing about food means that I am fortunate enough to eat out regularly and every so often an invitation comes along which really intrigues me, which was the case this week when I went along to Santa Maluco* in Liverpool to try their new vegan menu. This is a fun restaurant with a vibrant atmosphere and a menu of wood fired pizzas made in their custom built oven, as well as an impressive selection of cocktails such as their renowned $5 Dollar Shake. 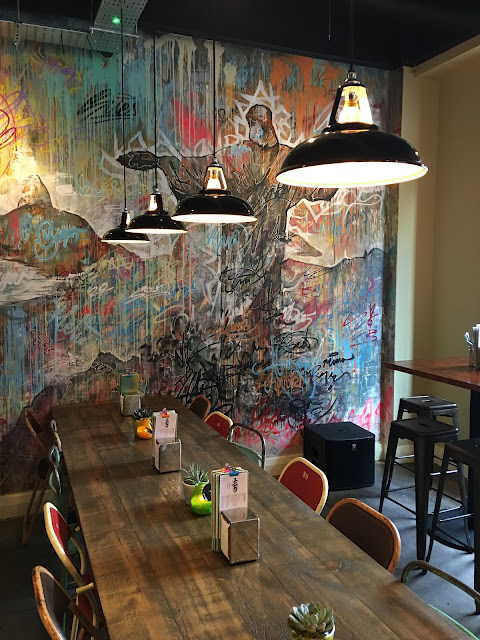 I reviewed Santa Maluco for Olive Magazine a while ago and I have long been a fan of the restaurant, so I was pleased to hear that they are introducing their ‘Vegan Mondays’, which sees a selection of vegan pizzas available either by the slice or ‘rodizio’ style, an all you can eat concept where pizzas are brought out to you fresh from the oven so you can continue having slices until you are full. Tables are equipped with a wooden spinner, which allows you to indicate when you want more pizza and when you have had enough. We settled in at one of the long communal tables overlooking the open kitchen, where the pizza chefs were whirling around creating their masterpieces.
First up, we tried the ‘what the duck’ vegan pizza, topped with mock duck, char sui, spring onions, cucumber, mozzarella and sesame seeds. This was packed with flavour and I loved the idea of an oriental style pizza. 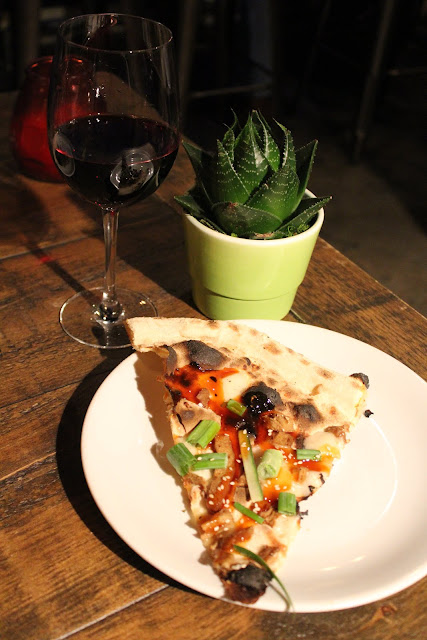 I am something of a traditionalist when it comes to pizza and I love the unbeatable simplicity of a good margherita, which was the next variety we tried. This vegan take on the classic Neapolitan style pizza worked a treat, with vegan mozzarella and tangy tomato sauce on their signature thin and bubbly wood fired base. 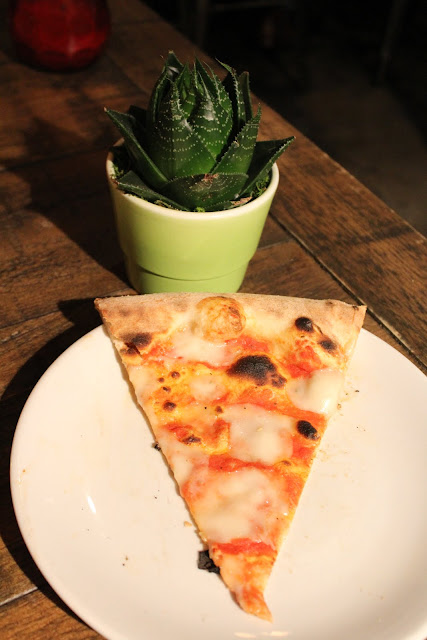 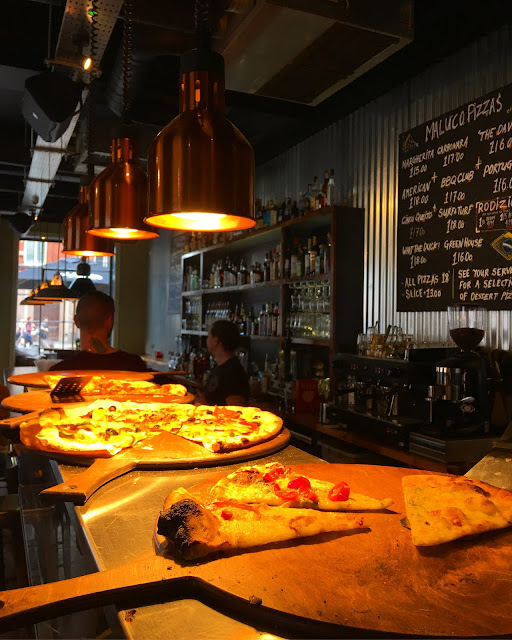 We moved on to trying the Buffalo Soldier pizza, which showed imagination, with buffalo style cauliflower marinated in Frank’s Red Hot Sauce as well as mozzarella, blue cheese and celery. I loved the spicy kick of the hot sauce and it was the first time I have tried cauliflower on a pizza, which worked well. 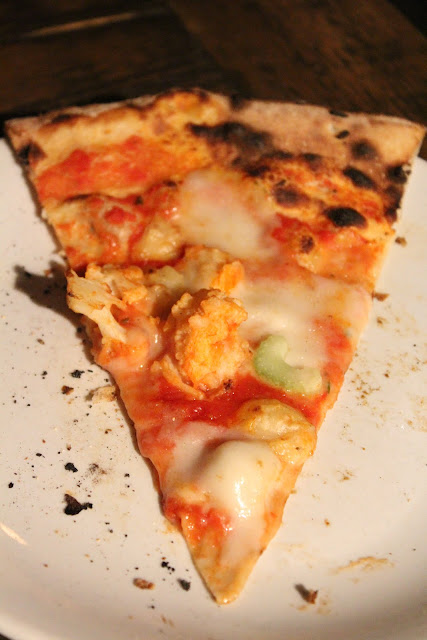 The Falaffin’ pizza topped with falafel, tomato, cucumber, tahini and walnuts was our next choice and the crunchy, delicately spiced falafel really added to this pizza. 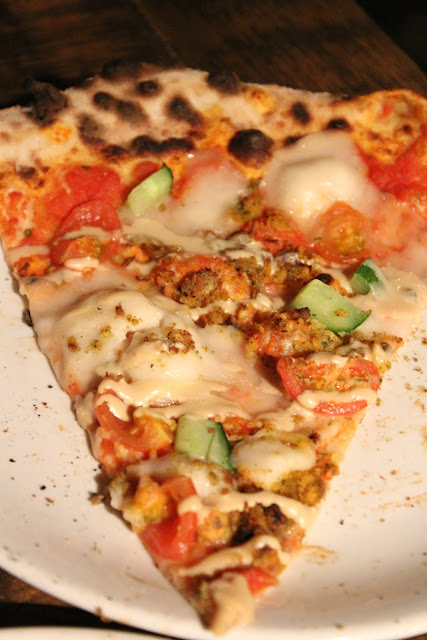 We moved on to the Return of the Mac, which delivered the enjoyment of a vegan burger in pizza form with toppings of vegan mince, mozzarella, big mac sauce, white onions, pickles and lettuce. The ratatouille vegan pizza was another winner, and the chunky ratatouille made this a rustic treat which was the ideal winter warmer. 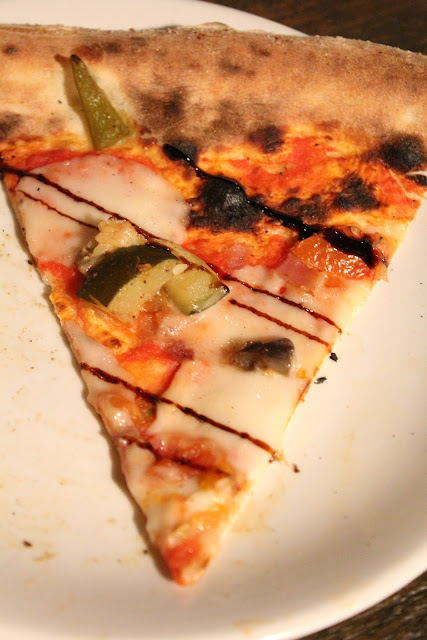 We just about managed to find some room for a slice of vegan dessert pizza, spread with thick chocolate and sprinkled with strawberries, hazelnut and sweet cream. This was the perfect treat to round off the evening. 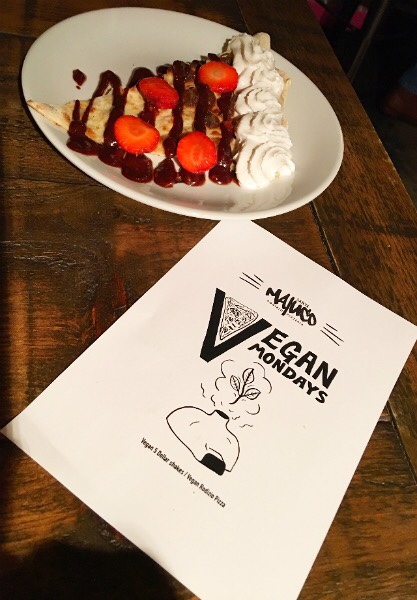 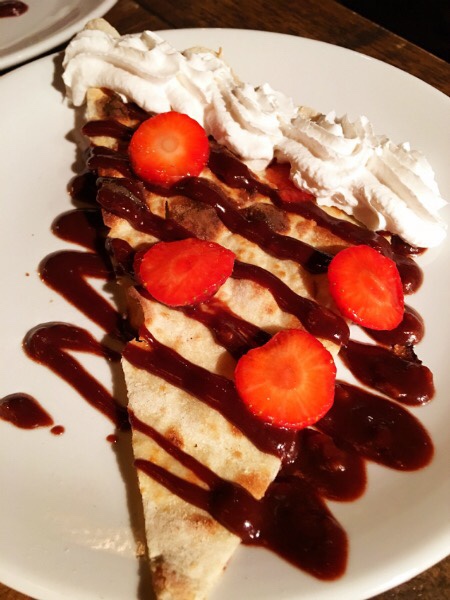 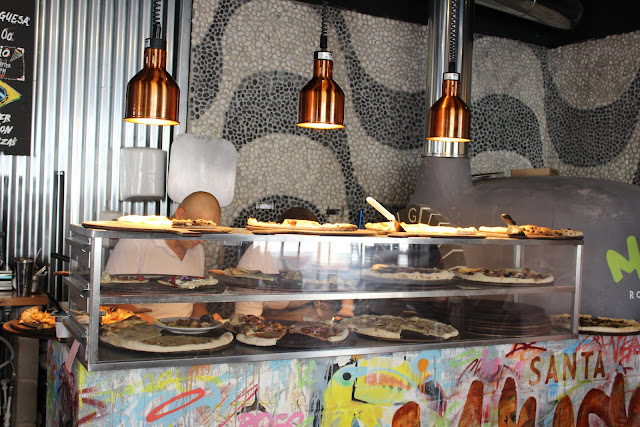 Vegan Monday is priced at £10.95 before 4pm and £15.95 after 4pm for Rodizio pizza or £3 per pizza slice. With so many exciting vegan pizzas to choose from, it is no surprise that Vegan Monday at Santa Maluco is already proving popular and we loved the variety of toppings and the irresistible wood fired base which this restaurant is known for.

What do you all think, do you like the sound of Vegan Monday and which of the pizzas would you like to try? As always I cannot wait to hear your thoughts and thank you so much for reading this post.

*We were invited to try the Vegan Monday menu at Santa Maluco, this meal was complimentary. Opinions stated herein are my own and honest.