George’s* is a restaurant and bar located just outside Manchester in the village of Worsley, the elegant building is situated opposite the canal and there is a large outdoor terrace ideal for sunny days. Head Chef Mike Brand has created a menu full of modern British dishes and classics and on Monday the restaurant serves a themed menu alongside the usual à la carte. We went along to sample the Monday menu and we visited on Spanish Night, when a three course menu of Spanish inspired dishes was on offer. We sipped a round of drinks in the bar area before taking our seats for dinner; the high ceilings, chalk boards, suspended feature lighting and neutral colours create a modern aesthetic which feels welcoming. 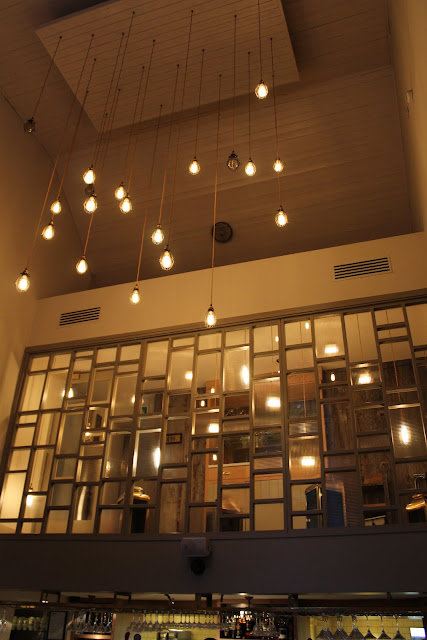 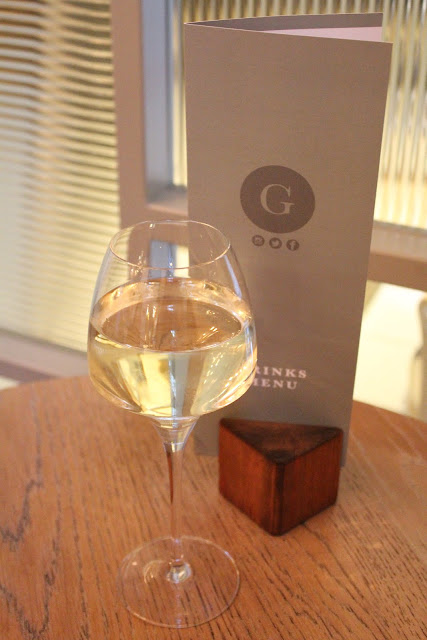 We were led to a table in the spacious dining room and took our seats at a corner table with leather banquette seating; trade was brisk for a Monday evening and the room was already busy with diners. We deliberated between starters and the marinated grilled shrimp with garlic aioli caught my eye, as did the gazpacho, before I eventually settled on the roasted pepper and aubergine salad with honey dressing. The choice of mains was equally tempting with seafood paella and pan fried hake with patatas bravas and chorizo oil among the dishes which I was drawn to. 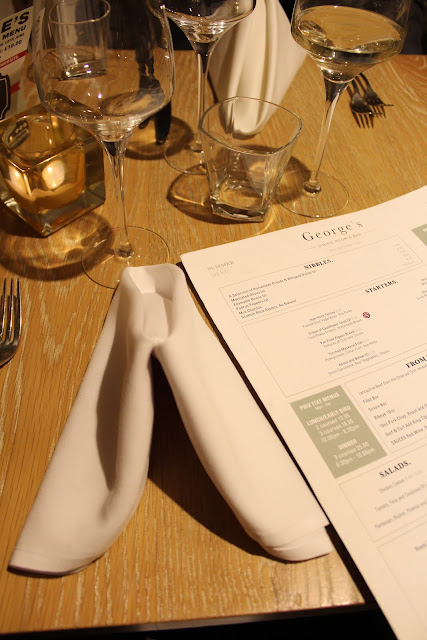 Our starters arrived in no time and my salad was nicely presented in a generous portion and the mixed leaves had a sweet and tangy flavour from the honey dressing while the roasted pepper and aubergine added to the enjoyment of this Mediterranean dish.

My dining companion went for the Iberico platter with homemade bread and Jamon pâté, which was full of flavour with a fresh salad topped with crumbly feta which complemented the rich pâté. 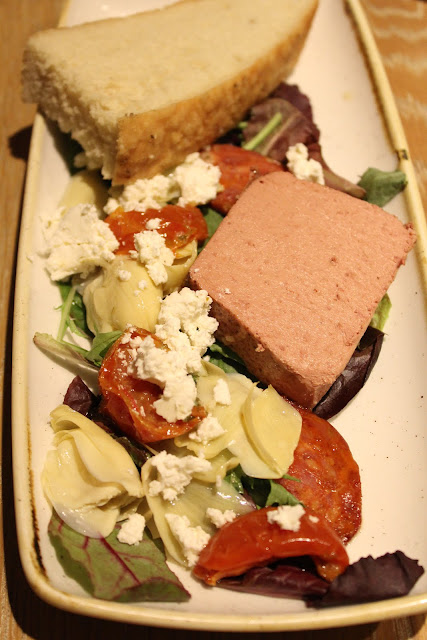 My main course of smoked cheese tortilla with tomatoes and saffron aioli delivered too; the fluffy tortilla had layers of finely sliced potatoes and combined with the smoked cheese and side salad this was a satisfying dish which was lighter than tortillas I have tried before. 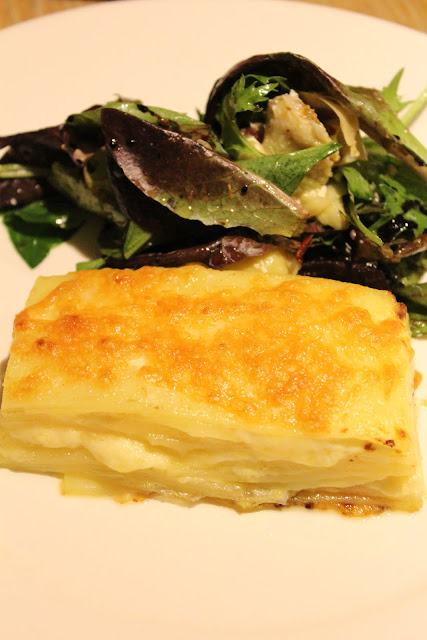 For the main course, my dining companion was tempted by the Spanish meatballs with tomato and couscous, but he ended up ordering the paprika and garlic bavette with vine tomatoes and fries. The steak was tender and well seasoned, with a good balance of garlic and paprika, while the zesty tomatoes and generous portion of fries added to the enjoyment. 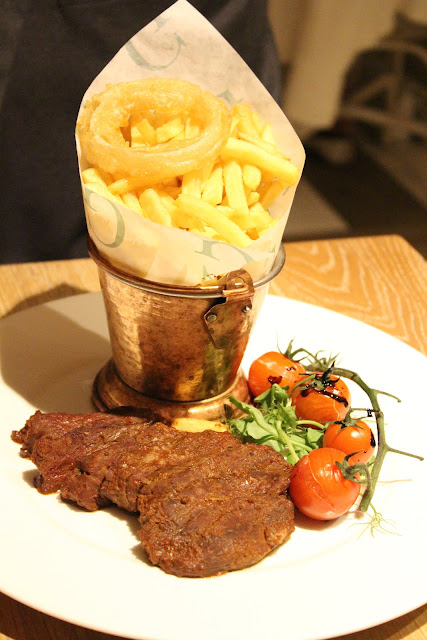 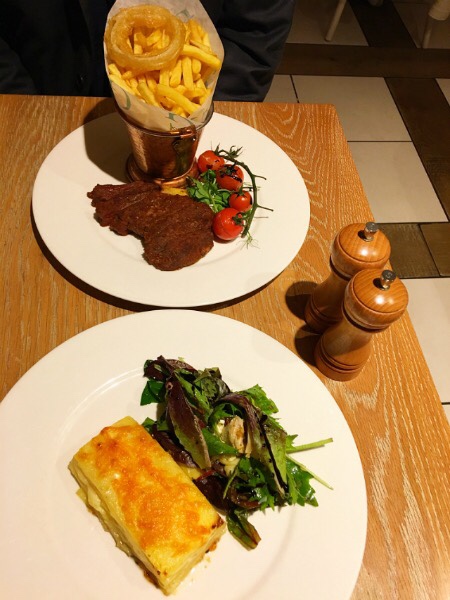 Dessert choices called for more debate, with options such as Catalan cream with nut crumb and white chocolate and rum panna cotta vying for our attention. We settled on a portion of churros with chocolate and a custard tart with coconut ice cream to share. The golden churros had crispy edges drenched in sugar and cinnamon and they tasted incredible with the thick melted chocolate. The second dessert choice made the perfect contrast to the churros and the creamy custard tart worked well with the exotic taste of the coconut ice cream. 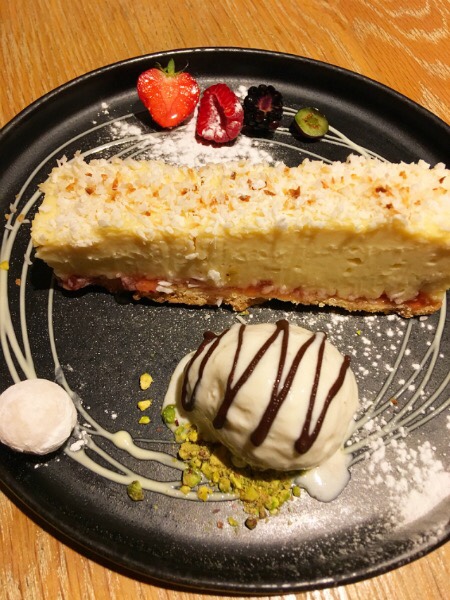 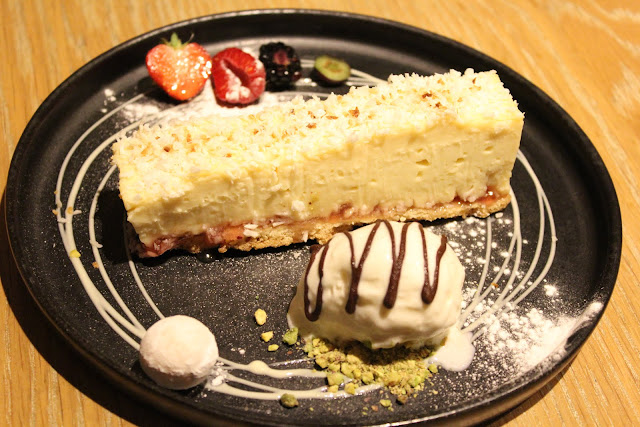 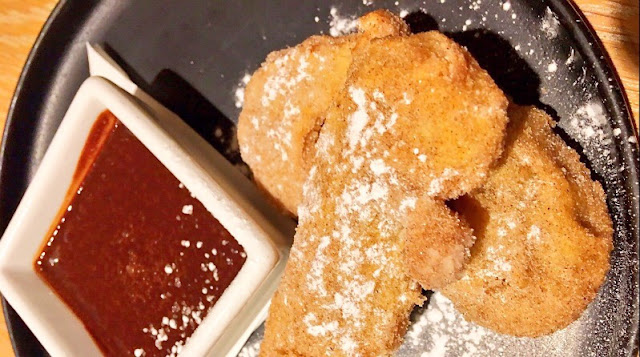 
Service was friendly and attentive despite how busy the restaurant was and I thought the Spanish menu offered value for money, with starters and desserts at £5 and mains at £10 as well as offers on wine, cocktails and Prosecco.

What do you all think, do you like the sound of George’s and which of these dishes would you like to try? As always I cannot wait to hear your thoughts and thank you so much for reading this post.

*I was invited to review George's, this meal was complimentary. All opinions expressed herein are my own and honest.